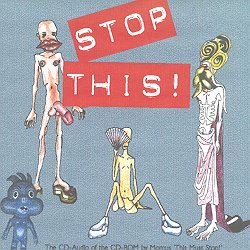 CD ROMs like Kuniyoshi Kaneko’s Alice and Necro Enema Amalgamated’s Blam! seem more interesting than music CDs. Momus decides to make his own, and sit in his flat on the Place Du Tertre, Paris, poring over the Director 4.0 manual, learning about stages, sprites and lingo. For a couple of months, instead of getting up in the morning and writing a song, Momus gets up in the morning and makes an interactive presentation in Director, featuring a cast of somewhat disturbing characters (the fascist Putsch, the gibbering, lustful humunculus Balbus, Goat Hare the guide, the writer Ryunsuke Carlos Stevens Infanta, the druggy beatnik girl Beatrice). ‘Stop This!’ is the audio version of the CD ROM ‘This Must Stop’.